For nests, Yellowfoots most often use piles of leaf litter, but sometimes dig, use half digging and half litter, or just leave the eggs on the surface. A typical yellow-foot clutch is 3-10 eggs that are more spherical and a bit larger than Redfoots

The conservation status of the Yellowfoot is (CITES), Appendix II. These are endangered and controlled by CITES of any international trade. Habitat destruction, consumption, and over exportation is the main threats to this species.

They are mostly brown to dark coffee carapace with light patches and have a dark head and limbs with scales in some shade of yellow to yellow-orange.The growth rings on the scutes are generally smoother than the red-footed. The plastron is dark with paler centers to the scutes.

Primarily these specimens take to the forest floor in the Amazon Basin, and are very good climbers, and hiders. The yellow-foot tortoise is known to like less light in captivity as it is used to having the sunlight filter through the various canopies of the Amazon Rain Forest in South America. Yellow-foots are very good swimmers. When the rainy season is in full swing these tortoises will take no obstacle in swimming through basin deltas, and rivers to breed, or even forage for food.

Geochelone denticulata
The Yellowfoot tortoise is very similar to the red-footed tortoise (Chelonoidis Carbonaria). Yellowfoot tortoises are found in deeper forest regions whereas the red-foots are found in more outlined forest savannas, than in the actual forest. The yellow-foot is the 3rd largest mainland tortoise. They typically grow 14″ to 20+ inches in about ten years. Older adults can range 16"-37" 20-200 pounds. The largest recorded specimen was 37" in length and almost a couple hundred pounds. Primarily these specimens take to the forest floor in the Amazon Basin, of Brazil, Peru, Ecuador, and Northern Bolivia. They are also found in Guyana, Suriname, and Columbia.

It is unclear if yellow-footeds have a distinct mating season or not. Yellow-footeds court by sniffing the cloacal region and doing species-specific head movements side to. A willing female responds with similar motions and female yellow-footeds also release a strong scent. Similar motions are also used to determine dominance between males. Ramming, chasing, and biting are also often involved, especially with the rather aggressive yellow-foots. Yellowfoots vocalize when breeding with clucking like a chicken. 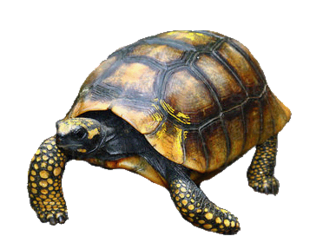 TO READ MORE ABOUT OR TO PURCHASE A YELLOWFOOT TORTOISE, CLICK HERE 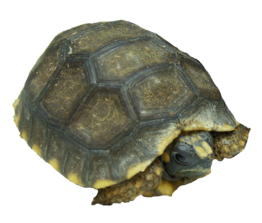