The Red-footed Tortoise grows to 12-14 inches long in about ten years. It has a mostly dark carapace with light patches. The head and limbs are dark with colorful scales ranging from brilliant red to pale yellow. There exists lots of individual and regional variation.

Mating season usually starts just before the rainy season (March to June) but varies regionally. Redfoots court by sniffing the cloacal region and doing up and down head bobbing (although they do not always bother). A willing female responds with similar motions. Similar motions are also used to determine dominance between males. Head and leg coloration plays an important role in how the Redfoots select a mate. Ramming, chasing, and biting are also often involved, especially with the rather aggressive Eastern Redfoots. This species vocalize with clucking like a chicken.

TO READ MORE ABOUT OR TO PURCHASE A REDFOOT TORTOISE, CLICK HERE

TO READ MORE ABOUT OR TO PURCHASE A CHERRYHEAD TORTOISE, CLICK HERE

In the wild, their diet mainly consists of a vast variety of fauna and some grasses in the South American grasslands. Fruits that have fallen from trees, insects, invertebrates, and carrion for protein intake.

Cherry Head RedFoots are a extremely handsome and colorful , Many have classified this tortoise to be a slightly smaller version ( dwarf) of the classic Red Footed Tortoise , although this is not always the case. 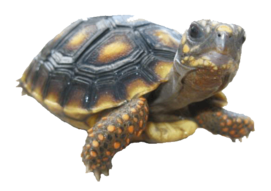 Northern red-foots will lay 5-15 elongated eggs about 2 inches long from July to September, and often have a second or even third clutch later in the year. Southern and eastern red-footeds do not seem to follow as strict of a schedule. Red-footeds usually dig a hole to lay the eggs in- not always an easy job in packed soil. Like many other species, they urinate to help soften the soil while digging. 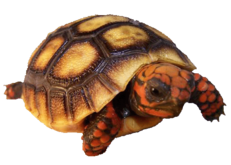 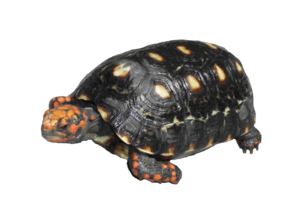 Geochelone carbonaria
The range of the Red-Foot tortoise is tropical savannas on the outskirts of the Amazon Basin in Costa Rica, Panama, Columbia, Venezuela, Guyana, Suriname, Peru, Brazil, Bolivia, Paraguay, and regional Islands Trinidad/Tobago, Barbados, and Corn Island. Typically, they are found where the Amazon rainforest starts to lose its thick, lush forest-like fauna and cascades into more open meadows with flowing hills and broken horizons of tropical lush plants and drier conditions than that of the deep rainforests. These regions can be quite diversified where each classification of Red-Foot is found. To date, there have been conclusive studies on five genotypes of this species. Their habitats are key to their genotypes:

Most Cherry Heads sport the classic bright red head and leg scales,and the "Rudolph Nose" but also can include an array of colors such as red/pink/orange head & leg scale coloring. Even variations within shell patterns and coloring may differ. One example would be the sought after "marbled ones" which are included in this species. Morphs and Hybrids such as the black cherrys have been introduced as well. Found in limited areas, primarily in the Paraguayan Chaco, and the Brazilian rain forests, these impressive tortoises are well sought after in the tortoise world

The conservation status of the Redfoot Tortoise is Vulnerable IUCN 3.1 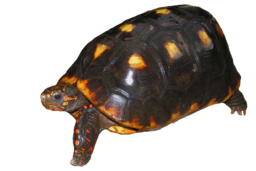