Marginated tortoises are fairly calm and relaxed, although they can be somewhat territorial in the wild. They have a controlled temper and are generally slow to anger. If they are not given the proper diet in captivity, however, they will become rather aggressive and might mistakenly attack if they feel threatened . 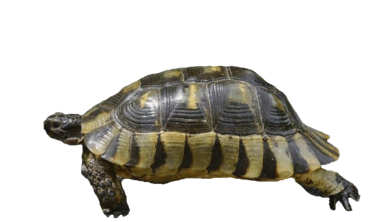 Testudo marginata
The marginated tortoise (Testudo marginata) is a species of tortoise found in Greece, Italy and the Balkans in southern Europe. It is the largest European tortoise, reaching a weight of up to 5 kg (11 lb) and a length of 35 cm (14 in). Its shell is oblong and has a notable thickness around the middle of the body. The posterior end of the shell has a saw-like formation, flanged outward like a bell. The carapaces of adult specimens are almost completely black, with yellow highlights. The front sides of the limbs are covered with large scales. The tail is notable for a lengthwise marking and for an undivided carapace over the tail. The marginated tortoise is herbivorous, and hibernates for the winter.

TO READ MORE ABOUT OR TO PURCHASE A MARGINATED TORTOISE, CLICK HERE

After waking from hibernation, the mating instinct starts up. The males follow the females with great interest, encircling them, biting them on the limbs, ramming them, and trying to mount them. During copulation, the male opens his mouth, showing his red tongue and making loud cries. The tone of the copulation cry is almost sobbing with long, deep tones, in contrast to T. hermanni, which uses a much higher-toned, peeping noise.

During mating, the female stands still and holds her head to the side, looking up to see the opened mouth of the male. The red tongue apparently serves a signaling function. The female moves her head from left to right in the same rhythm as the male's cries. 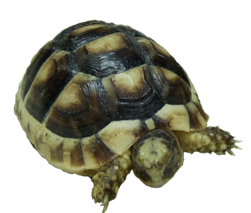 The natural range of the marginated tortoise is southern Greece, from the Peloponnesus to Mount Olympus. They are also found in isolated zones of the Balkans and Italy, and northeastern Sardinia.  The marginated tortoise lives in more mountainous regions than Hermann's tortoise. It can be found in elevations as high as 1,600 m (5,200 ft). The black color of the carapace is helpful for survival in this environment, as it allows the tortoise to absorb a great deal of heat in a short time, helping it maintain its body temperature. Early in the morning, marginated tortoises bask in the sun to raise their body temperature, and then search for food. After feeding, the tortoises return to their shelters in the hot midday hours, leaving them again in the late afternoon.

Once the hole is dug, egg-laying begins. Each egg is gently rolled back into the hole. After the last egg, the female immediately begins refilling the hole, again using her hind legs. Finally, she stamps the opening closed with her feet so that the ground regains its natural hardness. Larger animals may lay eggs as many as three times per summer, with about 15 eggs per clutch.

The incubation period averages about 100 days under natural conditions, which is relatively short among tortoises. Many tropical tortoises have incubation periods of up to 200 days. The relatively short time is an adaptation to the subtropical Mediterranean climate, where the summers are not as long. In an incubator, this time is notably shorter: with an incubation temperature of 31.5 °C (88.7 °F) the eggs will begin hatching after 60 days.