Early in the morning, the animals leave their nightly shelters, which are usually hollows protected by thick bushes or hedges, to bask in the sun and warm their bodies. They then roam about the Mediterranean meadows of their habitat in search of food. They determine which plants to eat by the sense of smell. (In captivity, they are known to eat dandelions, clover, and lettuce, as well as the leaves, flowers, and pods of almost all legumes.) In addition to leaves and flowers, the animals eat small amounts fruits as supplementary nutrition.

Around midday, the sun becomes too hot for the tortoises, so they return to their hiding places. They have a good sense of direction to enable them to return. Experiments have shown they also possess a good sense of time, the position of the sun, the magnetic lines of the earth, and for landmarks.  In the late afternoon, they leave their shelters again and return to feeding.

Testudo hermanni
There are two races of Hermann tortoises, a Western race and an Eastern race –
The Western race, testudo hermanni hermanni, is native to northern Spain, southern France, northwest Italy and some of the islands in the western Mediterranean. They grow to 15-18cm in length. Compared to its Eastern cousins, it is more brightly colored, with a more domed carapace. Western Hermann tortoises usually (but not always) have a yellow spot on the head behind each eye. The most reliable distinguishing mark is the two dark bands running along the length of the plastron (i.e. the underbelly), which the Eastern race do not have

TO READ MORE ABOUT OR TO PURCHASE A HERMANN'S TORTOISE, CLICK HERE 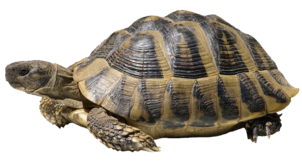 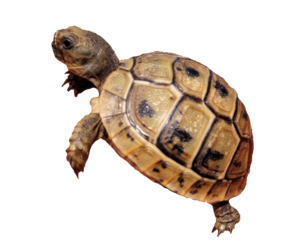 The Eastern race, testudo hermanni boettgeri, is native to southern Italy, Albania, Greece, Yugoslavia and the Balkans. The shell is not as highly domed than the Western race and they grow a bit bigger, to about 20cm. The markings show more individual variation than in Western Hermanns, with less color contrast. The yellow spot behind the eye is rare (though some have it!). Most distinctively, the underbelly of this beast has more broken, faded marking than the Western subspecies.

Hermann tortoises can be identified by their distinctive tail, which has a large scale or nail at the end. They are brightly colored, though this brightness may fade with age. The males are somewhat smaller than the females.

In late February, Hermann’s tortoises emerge from under bushes or old rotting wood, where they spend the winter months hibernating, buried in a bed of dead leaves. Immediately after surfacing from their winter resting place, Hermann’s tortoises commence courtship and mating. Courtship is a rough affair for the female, which is pursued, rammed, and bitten by the male, before being mounted. Aggression is also seen between rival males during the breeding season, which can result in ramming contests.

Between May and July, female Hermann’s tortoises deposit between two and 12 eggs into flask-shaped nests dug into the soil, up to 4 " deep. Most females lay more than one clutch each season. The pinkish-white eggs are incubated for around 90 days. Young Hermann’s tortoises emerge just after the start of the heavy autumn rains in early September, and spend the first four or five years of their lives within just a few yards of their nests. If the rains do not come, or if nesting took place late in the year, the eggs will still hatch, but the young will remain underground and not emerge until the following spring.

Hermann tortoises (testudo hermanni) are one of the most popular species of tortoise to keep as pets and it’s easy to see why. They have a level of individual personality that is rare in reptiles, and they can be very charming and funny. They develop a bond of companionship with their owner, and you will get to know their individual quirks, likes and dislikes. They live about 75 years, which gives us something in common!