Testudo graeca ibera
The Greek Tortoise, also called the spur-thighed tortoise, is found North Africa, southern Europe, and southwest Asia. It is prevalent in the Black Sea coast of the Caucasus (from Russia Anapa to Abkhazia Sukhumi to the south), as well as in Georgia, Armenia, Azerbaijan, France and England. The Greek tortoise inhabits a variety of habitats, including some that are particularly arid: rocky hillsides, Mediterranean scrub, forests, fields and meadows are all occupied by the Greek tortoise subspecies. A highly domed carapace joins the singly hinged plastron by a thick bridge. The coloration ranges from yellow-gold to dark brown or black. Flecks, borders, rays and spots on the shell produce a pattern reminiscent of a Greek mosaic, hence the common name.

Males differ from females in six main points. Firstly, they are generally smaller. Their tails are longer and taper to a point evenly, and the cloacal opening is farther from the base of the tail. The underside is somewhat curved, while females have a flat shell on the underside. The rear portion of a male's carapace is wider than it is long. Finally, the posterior plates of the carapace often flange outward.

Over the last few decades, many Greek tortoises, particularly Ibera and goldens, were imported into the United States for the pet trade. Many of these animals harbored parasites and diseases and, sadly, many did not survive.  Those that received medical attention

TO READ MORE ABOUT OR TO PURCHASE A GREEK TORTOISE, CLICK HERE

and appropriate care, however, are now thriving in captivity. This founder stock has produced a high number of captive-bred babies, some now grown up and producing offspring of their own, and these USA-born tortoises have proven to be an excellent choice for the reptile keeper. A rather responsive species, the Greek tortoise has gotten rave reviews from those who have attempted to keep it long term, the right way.

Depending on the subspecies, Greek tortoises will grow to between 5 and 8 inches. Some examples of T. g. ibera may attain 10 or 11 inches, but this is rare. At hatching, most Greek tortoises are no more than an inch in length. They can grow rapidly when overfed and reports of them reaching 4 inches in less than two years is common, but not recommended

Similar to most turtles and tortoises, Greek tortoises do not like to be held. They should be picked up only when absolutely necessary, such as prior to being soaked, cleaning of the enclosure and health checks. While they tend to become very responsive to their keepers and will approach for food, they should not be over-handled by any means.

Greek tortoises are easy-going, friendly and interactive, but like all reptiles, they should never be overly stressed. 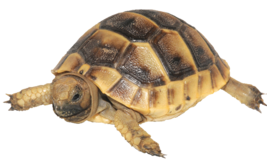 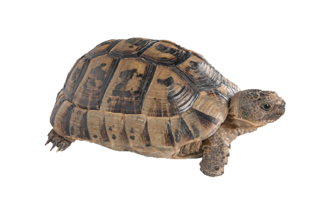