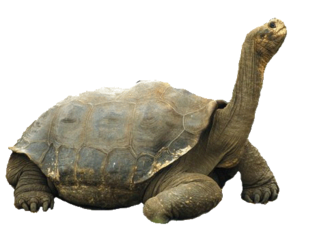 The tortoise is native to seven of the Galápagos Islands, a volcanic archipelago about 620 mi west of the Ecuadorian mainland. With lifespans in the wild of over 100 years, it is one of the longest-lived vertebrates. A captive individual lived at least 170 years. Spanish explorers, who discovered the islands in the 16th century, named them after the Spanish galápago, meaning tortoise.

Shell size and shape vary between populations. On islands with humid highlands, the tortoises are larger, with domed shells and short necks; on islands with dry lowlands, the tortoises are smaller, with "saddleback" shells and long necks. Charles Darwin's observations of these differences on the second voyage of the Beagle in 1835, contributed to the development of his theory of evolution.

Tortoises sometimes rest in mud wallows or rain-formed pools, which may be both a thermoregulatory response during cool nights, and a protection from parasites such as mosquitoes and ticks. Parasites are countered by taking dust baths in loose soil. Some tortoises have been noted to shelter at night under overhanging rocks - others have been observed sleeping in a snug depression in the earth or brush called a "pallet". Local tortoises using the same pallet sites, such as on Volcán Alcedo, results in the formation of small, sandy pits.

The tortoises are herbivores that consume a diet of cacti, grasses, leaves, lichens, and berries. They have been documented feeding on Hippomane mancinella ('poison apple'), the endemic guava Psidium galapageium, the water fern Azolla microphylla, and the bromeliad Tillandsia insularis. Juvenile tortoises eat an average of 16.7% of their own body weight in dry matter per day, with a digestive efficiency roughly equal to that of hindgut-fermenting herbivorous mammals such as horses and rhinos.

Tortoises acquire most of their moisture from the dew and sap in vegetation (particularly the Opuntia cactus); therefore, they can survive longer than 6 months without water. They can endure up to a year when deprived of all food and water, surviving by breaking down their body fat to produce water as a byproduct. Tortoises also have very slow metabolisms. When thirsty, they may drink large quantities of water very quickly, storing it in their bladders and the "root of the neck" (the pericardium), both of which served to make them useful water sources on ships. On arid islands, tortoises lick morning dew from boulders, and the repeated action over many generations has formed half-sphere depressions in the rock

Tortoise numbers declined from over 250,000 in the 16th century to a low of around 3,000 in the 1970s. This decline was caused by overexploitation of the species for meat and oil, habitat clearance for agriculture, and introduction of non-native animals to the islands, such as rats, goats, and pigs. The extinction of most giant tortoise lineages is thought to have also been caused by predation by humans or human ancestors. Tortoise populations on at least three islands have become extinct in historical time due to human activities. Specimens of these extinct taxa exist in several museums and also are being subjected to DNA analysis. Ten subspecies of the original 15 survive in the wild; an 11th subspecies (C. n. abingdonii) had only a single known living individual, kept in captivity and nicknamed Lonesome George until his death in June 2012. Conservation efforts, beginning in the 20th century, have resulted in thousands of captive-bred juveniles being released onto their ancestral home islands, and the total number of the species is estimated to have exceeded 19,000 at the start of the 21st century. Despite this rebound, the species as a whole is classified as "vulnerable" by the International Union for Conservation of Nature.

The tortoises are ectothermic (cold-blooded), so bask for 1–2 hours after dawn to absorb the sun's heat through their dark shells before actively foraging for 8–9 hours a day. They travel mostly in the early morning or late afternoon between resting and grazing areas. They have been observed to walk at a speed of 0.2 mph. 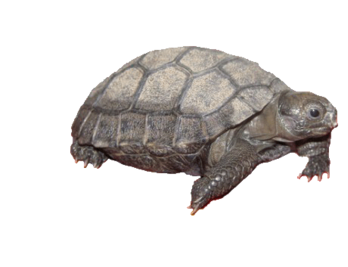 On the larger and more humid islands, the tortoises seasonally migrate between low elevations, which become grassy plains in the wet season, and meadowed areas of higher elevation (up to 2,000 ft in the dry season. The same routes have been used for many generations, creating well-defined paths through the undergrowth known as "tortoise highways". On these wetter islands, the domed tortoises are gregarious and often found in large herds, in contrast to the more solitary and territorial disposition of the saddleback tortoises.