Testudo kleinmanni
Testudo Kleinmanni has several common names: the Egyptian tortoise, the miniature tortoise and the Kleinmann tortoise. They are a costal species, and are never found any more than 100km from the sea. Kleinmann's tortoise is the smallest tortoise in the Northern Hemisphere. This is the second smallest species of tortoise in the world (the smallest is the speckled padloper of South Africa). The average total carapace (top shell) length is 5.67 inches. Females are generally a bit larger and weigh 10.6–12.4 ounces, with males about 4 inches and 5.6–8.8 ounces. Female tortoises are larger than the males; males are more slender and have a longer tail.

They are least active when the weather is very cold or very hot. During the colder months, they are out most during midday. During the warm season, they are active in the mornings and evenings. The rest of the day is spent under bushes or in rodent burrows. 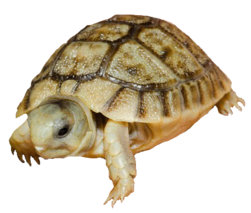 Formerly thought to occur across Libya, Egypt and Israel, the populations east of the Nile delta in Egypt and in Israel have recently been found to be a separate species, Testudo werneri. Furthermore, the species is effectively extinct in the remaining areas of Egypt. The tortoise is still found in two distinct regions of Libya - Tripolitania and Cyrenaica.

The Egyptian tortoise is protected by law in Egypt but not in Libya. Additionally, the tortoise is listed under Appendix I of CITES, prohibiting international trade in the species. However, these protective laws are evidently often flouted. 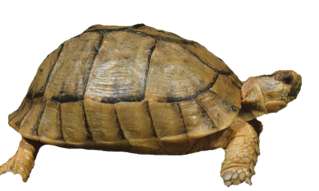 One of the most remarkable features of this species’ breeding behaviour is the loud, distinctive vocalisation emitted by the male during mating, which has been described as similar to the sound of a mourning dove’s call, and is quite unlike that of any other Mediterranean tortoise

TO READ MORE ABOUT OR TO PURCHASE AN EGYPTIAN TORTOISE, CLICK HERE